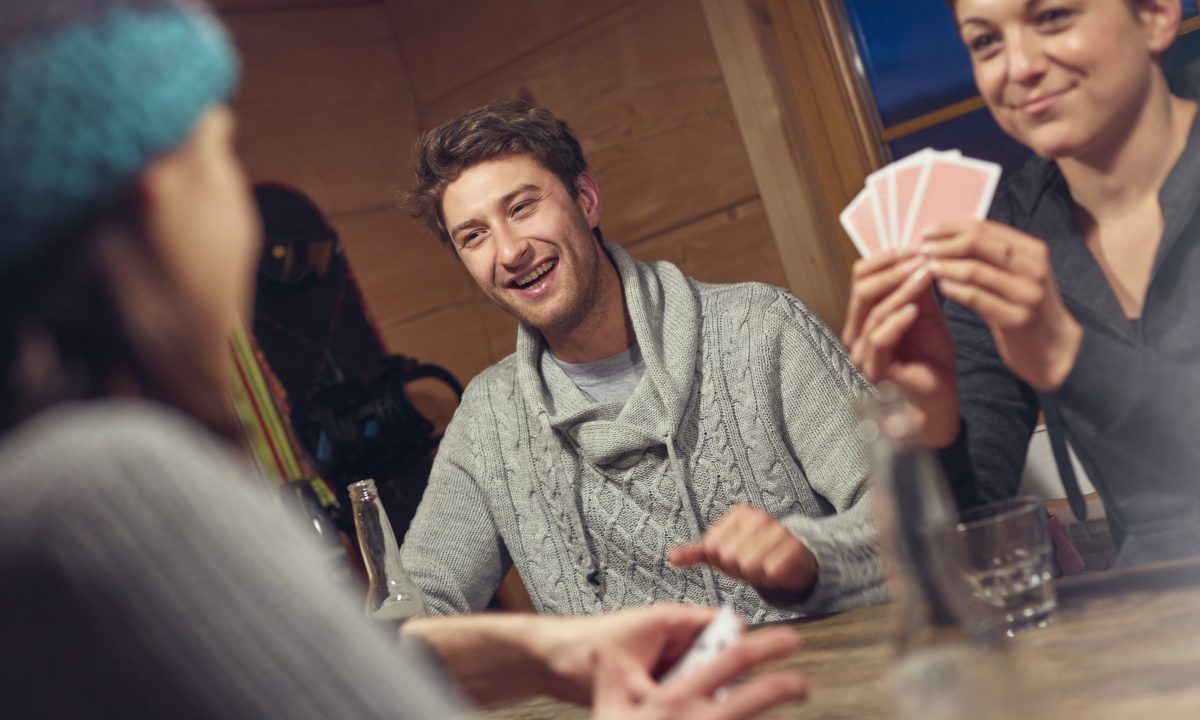 Three Lesser-Known Card Games That Can Weatherproof A Weekend

Being out in the woods for a long weekend is a magical time. There are countless ways to make it great, but inclement weather can wreak havoc on the experience.

Having a deck of cards is one way to pass the time. While adults may want to still venture out, it is harder with kids. That does not mean anyone wants to be stuck with ‘Go Fish’ or ‘War’ for hours on end. Likewise, teaching a pre-teen the nuance of no-limit hold ’em may be inappropriate to some.

That said, there are some great card games that you can play — that move beyond the staples — that can still keep the kids involved. Each can also all be modified, if it is an adult-only weekend.

There are some other, more vulgar, names for this game. If you look up variations use those spellings.

What you need: 52-card deck (no jokers). Three coins (or other tokens) per player.

All players take their seat and a dealer is determined. You can use any method you want to do that. Most families have their own traditions, use them! Once a dealer is set, one card is passed, face down, to each subsequent player. The game then begins with the player left of the dealer. That first person looks at their card and can either keep it or switch cards with the next player to their left.

The goal is to have the highest card in play; Ace is low, King is high. If a player tries to pass to the owner of a King, the owner must immediately flip it over to block the trade. No player can swap for a King. My family takes the time to celebrate the rejection. Seriously. The player who tried to trade for a King must keep their card. Play then proceeds clockwise with each player having the opportunity to switch cards with the person on their left. On the dealer’s turn, that person can either keep their card or choose the top card from the remaining deck.

After the dealer decides, all players turn over their cards. The player with the lowest card loses a token. Some house rules allow for two players that paired to be exempt from losing a coin. If you play that way, a pair of 2’s can better someone with a 10 if the other cards are all face cards. Once the lowest card is determined, the deck is reshuffled and the dealer position rotates clockwise until the last player remains.

King in the Corner

This is another pretty simple game that often is overlooked in favor of other traditional options. The object is to get rid of your cards by playing them in a solitaire-like fashion into piles. Also, similar to solitaire, players must alternate red and black cards; in descending order.

The dealer will pass seven cards to each player and then place the remaining cards in the middle as playable pile. Said dealer will then turn the four top cards over, placing one on each of the four sides of the deck. It will form a north, south, east, west formation around the deck. Some call it the cross, but they will be the discard piles for the rest of the game.

From there, the player to the left of the dealer begins by drawing one card from the center pile. That player may make as many plays as possible during their turn in order to get rid of as many cards as possible from their hand into the discard piles. Once a player can no longer make a move, play moves to the left.

Players can lay a card — or sequence of cards — on the piles forming the cross. To make a play, the card played must be in descending order and the opposite color from what is on the pile. Again, like solitaire, if a 6♥ is facing, then the legal moves on it would be a 5♣ or 5♠.

If you are asking, why is it named “King in the Corner”. Well, Kings are the only cards that can be played in the corner spaces created by the cross. Playing a ‘King in the Corner’ can create eight piles to lay cards into. Once a King is played, all other payers may then lay off cards on that pile like any other.

The object is to wind up with nothing in your hand.

There are many names for this game but it is perfect for kids and/or inebriated adults.

Determine the dealer in whatever manner works best for you and yours. From there, the dealer sends each player six cards – also in whatever manner suits you. The remaining cards are set in the middle with the top card flipped over and placed as a playable stack next to the deck. Each player arranges their cards in three columns of two; they all remain face down. Each player then flips over the top two cards prior to the beginning of the round.

Play begins with the person to the left of the dealer. That player can either takes the face-up card next to the deck to replace one of their six or selects the top card off of the deck. If they choose the card that is face up, the player must use it to replace any of his six cards and discard a face-down card to the pile. If the player chooses to take a card from the deck, they can choose to either play it within the six, or discard to the pile. The object is to create pairs or the lowest possible, total number. Having an exposed J♥ may be worth 11-points if unpaired, but if combined with a J♣, the row is worth 0 points. A 6♥ with a A♥ is worth 7.

Play rotates to the left until all six cards for any player are overturned. The round is then complete; all cards are flipped over, and point totals are added. Point values are tabulated with the number on the card representing the point value for that card. An ace is worth 1, with escalating values up to 13 for a King. Some people will allow for unflipped pairs to cancel out at the end of the round. Others will not, because the cards were unturned and thus all counted as points.

The game ends when any player reaches a predetermined total score. Usually this is a game that goes to 301 or 500.